Scientific illustration was not Sally Bensusen’s first career path. While working as a computer programmer with the NASA/Goddard Space Flight Center and as an astronomer at the United States Naval Observatory in Washington, D.C., she discovered that she could combine her scientific background and her personal interest in art to become a full-time scientific illustrator. She has pursued this career since 1981. At first glance, her pieces appear to be accomplished works of art, but on closer inspection it becomes clear that they have been created in the service of science. Her illustrations teach, enlighten, and tell a story.

Bensusen found inspiration in the work of other artists; some were scientists, others were visionaries. She is a devotee of early science fiction films, enjoying the way that a fresh perspective can shake up expectations. She has sought to add that quality of surprise to her own work, bring the viewer up short, encouraging them to pay attention, to take a closer look, to be curious and questioning. She believes that curiosity and questioning lead to discovery and inspiration, and are the keys of creativity. 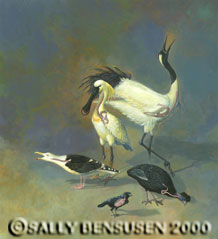 Bird Tracheas. An illustration showing the comparison of some of the largest bird tracheas as an explanation of why their calls are so attractive to females of that species from Natural History, "Biomechanics", March 2000. Acrylic-gouache (birds) and digital overlay (tracheas). 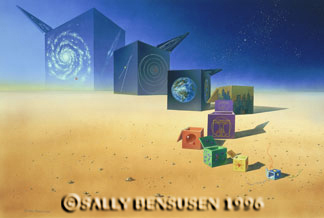