Bensusen’s work is a regular feature of many scientific publications. She has been commissioned by the National Geographic Society, Smithsonian, Scientific American, Horticulture, Ranger Rick, The Nature Conservancy and more. For years, her work appeared on every cover of the National Science Foundation's signature magazine, Mosaic. She developed and illustrated the monthly “Biomechanics” column for the magazine Natural History, working closely with the featured scientists. Her large-format work has included a 50-foot mural for the National Aquarium in Baltimore, as well as posters for the Smithsonian Institution, the National Science Foundation, Great Smokies National Park and the USDA Forest Service, and signage for the National Zoo in Washington.

Today Bensusen continues to run her own very successful studio near Washington, DC. As an illustrator of international renown, she presents lectures and workshops on both illustration and business practices for her colleagues. Recently Bensusen’s career has taken her full circle, once again working with the NASA Goddard Space Flight Center, this time as a Multimedia Specialist providing art, animation and web content for scientists studying the birth of the universe. 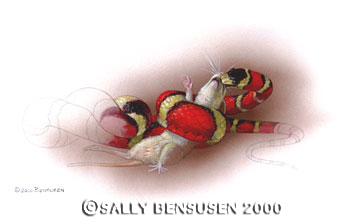 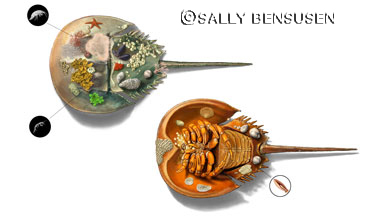 Rat Snake in acrylic gouache from the "Biomechanics" column in Natural History, November 2000. Demonstrating  snake muscles' ability to transmit large food objects down the trachea to the stomach.

Digital art showing the communities of animals that live on a horseshoe crab. Published in the June 2002  "Biomechanics" column of Natural History. 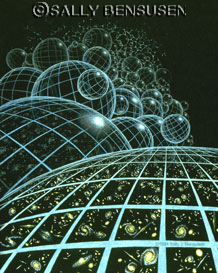