When Lindley found that his other responsibilities consumed his time, he turned to Drake as a replacement illustrator for his publications. As his illustrator, she drew from living plants and sketches that had been sent to Lindley from such places as Brazil, British Guinea, Australia and China. Her first illustrations appeared in Plantae Asiaticae Rariores, published in 1830. Her work for Lindley is included in the publications Edward’s Botanical Register, Ladies’ Botany, and the largest lithographic book of its day, James Bateman's Orchidaceae of Mexico and Guatemala. The exceptional quality of her work gave her wide recognition. Plates signed “Drawn from Nature and on Stone by Miss Drake” or “Miss Drake del.” are found in Lindley's Sertum Orchidaceum: A Wreath of the Most Beautiful Orchidaceous Flowers and The Botany of the Voyage of H.M.S. Sulphur by George Bentham. In acknowledgement of her contribution to his work, Lindley named the genus Drakea for her, which today contains three species – D. elastica, D. glyptodon, and D. jeanensis.


Drake was extremely prolific, creating well over 1000 illustrations for the Botanical Register alone. Her career ended when the Botanical Register ceased publication in 1847. She returned to Norfolk to live with her uncle, Daniel Drake. Five years later, she married John Sutton Hastings, a wealthy farmer. She died from diabetes on July 9, 1857.

Galeandra Baueri, from James Bateman's The Orchidaceae of Mexico and Guatemala, 1837-43.
Dielytra spectabilis, from The Journal of the horticultural Society of London, volume II, number III 1847. 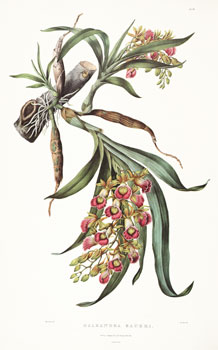 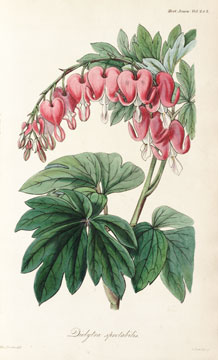