Elizabeth’s greatest adventure began on May 16, 1838. Leaving all but her oldest child with her mother, she and John set sail for Australia. Over the next two years, Elizabeth made hundreds of drawings from specimens for the publications Birds of Australia and A Monograph of the Macropodidæ, or Family of Kangaroos, as well as fifty illustrations for the Ornithology volume of Charles Darwin’s Zoology of the Voyage of H. M. S. Beagle. She also accompanied John into the Australian bush, giving her a thrilling, first-hand glimpse of her subjects. In Tasmania she gave birth to their seventh child, Franklin Tasman.


In August of 1840, the Goulds arrived back in London, but Elizabeth never completed the lithographs of the birds and mammals she saw in Australia. She died of puerperal fever after the birth of the couple’s eighth child, Sarah. She was 37 years old. After her death, her drawings were prepared on stone by H. C. Richter, and at publication, her name was not noted in connection with these works. Although grieved at the loss of his partner of twelve years, the enterprising John Gould continued production of his bird books, beautifully illustrated by a series of artists including H. C. Richter, Edward Lear, Joseph Wolf and William Hart.


A Century of Birds of the Himalaya Mountains was followed by the production of a five volume series, Birds of Europe. An exceedingly busy time for Elizabeth, she produced about 300 plates, traveled to Europe with John to visit important natural history collections, and gave birth to her fourth, fifth, and sixth children, Charles, Eliza, and Louise. 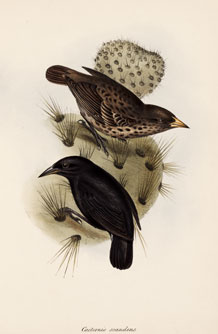 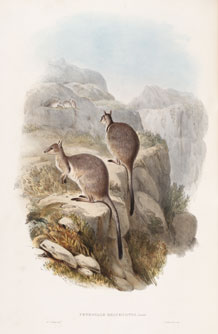 Petrogale Brachyotis, Short-eared Rock Wallaby. Plate 6 from A Monograph of the Macropodidae. The lithograph was drawn  on stone by H. C. Richter based on drawings by Elizabeth Gould but she received no credit for this contribution.

Zoology of the Voyage of H.M.S. Beagle Plate 42. Cactus finch, Cactornis scandens. Seeing the image of the specialized beaks of these finches suggested evolutionary possibilities to Darwin.