In 1991, Gunn attended a conference on botanical art at the Royal Horticultural Society in London. During her stay, she visited Kew Gardens, where she was enthralled by Margaret Stones’ illustrations of the flora of Tasmania. Upon learning that Ms. Stones lived nearby, Gunn made an appointment to visit the artist. Gunn showed examples of her paintings to Stones, who responded favorably. Stones encouraged her to keep painting and provided constructive criticism, which guides Gunn to this day.

Bee Gunn began illustrating plants in 1981 while living in Darwin, Northern Territory, Australia. She was initially attracted to botanical art by an article in the local newspaper featuring the work of Rita Walker. After six informal lessons with Walker, Gunn felt she had found her calling. She began to paint plants in earnest, using the exotic flora of tropical Australia as her subject. Through her painting, she developed a great curiosity about the lives of plants and was inspired to learn more about plant biology.  In 1989 and 1990, Gunn and her family spent 16 months in Dunedin, New Zealand, where she enrolled at Otago University as a graduate student studying botany and conservation.

Metrosideros excelsa, a member of the Myrtle family, in watercolor. 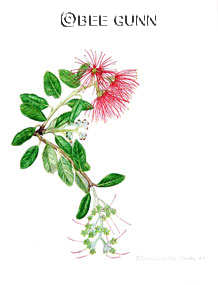 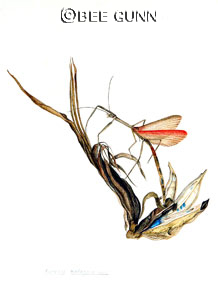