Jessa Huebing-Reitinger was born in Wisconsin in 1971. She grew up around horse farms in Florida and traces her career as a visual artist back to the age of twelve when she received her first paid commission from a horse farmer for an equine portrait in pastels. This was the beginning of a four year career, creating portraits of horses and dogs. After high school, she studied at the Kansas City Art Institute under Wilbur Niewald and Lester Goldman, graduating in 1993 with a Bachelor of Fine Arts in painting. During the next ten years, she painted prolifically, creating hundreds of works of art for solo exhibitions and commissions from non-profit organizations and corporate collectors.


Late in 2002, Huebing-Reitinger was “struck with a God-given vision” that sent her to the library. Leafing through one of many books on insects, a single photograph of a caterpillar captured her attention. At that moment, the memory of a childhood event came flooding back and she recalled witnessing the metamorphosis of a Luna moth as it emerged from its pupa. Her reaction to this memory made her realize how one small encounter can have a tremendous impact on an individual, opening up an entirely new perspective. She knew then that she wanted to create images of insects that would allow others to see these beautiful creatures in a different light, outside of cultural norms. 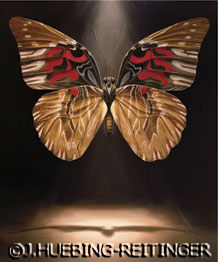 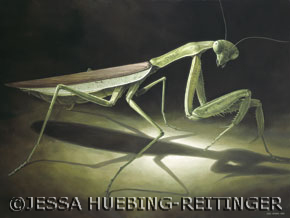