In pursuit of this vision, using insect specimens and a microscope, Huebing-Reitinger began creating over-sized portraits of insects. Acting on a suggestion from her husband, James Reitinger, she decided to execute the paintings within a public space, calling the concept Project InSECT. Because she did not have a scientific background, Huebing-Reitinger sought the help of the Entomology departments at Kansas State University and Kansas University. With their support she began educating herself. Over the last two years, the project has grown at a rapid pace. Project InSECT has been hosted at Kansas City’s Science City, the Kansas City Zoo, Powell Gardens, and the Henry Doorly Zoo in Omaha, Nebraska. Her future plans are to take the exhibition to the west coast and from there on to international exhibition.

Unlike most other artists or illustrators, Huebing-Reitinger does not sell her original works of art. Instead, she travels with them as an integral part of her exhibition. On location, she publicly creates new works, illustrating a continuing variety of specimens provided by zoos and other entomological collections. As her work evolves, so does the project. Her current focus is on endangered insects, such as the Nebraska Tiger Beetle. As a performance painter, Huebing-Reitinger’s process is also very different other illustrators. Dangling from a ladder, paint brush in hand, she sees herself as a bridge between the scientist and the general public. 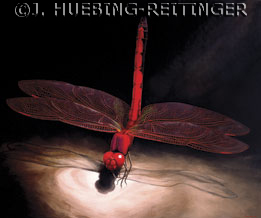 Trithemis arteriosa, a dragonfly indigenous to Kenya. This specimen was captured in 1987 and painted at Union Station, Kansas City, Missouri in 2004. Oil on canvas, 9' x 7.5'.
Chalybion californicum, a waisted wasp was collected and donated by an 11 year old boy in Omaha, Nebraska .
Oil on canvas, 2’ x 4,’ 2004. 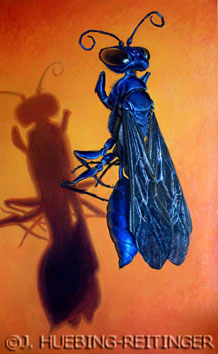