Hussey was a strong willed woman who approached her personal researches with an enthusiasm that she did not quite feel for her role as a clergyman’s wife. She resisted when she was called upon by “every old woman in the parish” and she chafed at her husband’s reminders of her duties. She was a prolific writer, the author of published fiction, as well as the extensive text that accompanied the plates in Illustrations of British Mycology. During her most creative period, she maintained an active and candid correspondence with her mycological mentor, Reverend M. J. Berkley, which provides many details of her daily life and work. In his lifetime, Berkeley described over 6,000 new species of fungi. He assisted Hussey with identifications and she supplied him with specimens. She was also acquainted with Charles Badham, a scholar of classical literature, and mycologist M. C. Cooke, who cites Hussey in his 1875 Fungi: Their Nature and Uses and called her “friend”.

Born Anna Maria Reed in 1805, Mrs. T. J. Hussey was both illustrator and author of Illustrations of British Mycology. She was married to Thomas John Hussey, an amateur astronomer who, following in his father-in-law’s footsteps, became Rector of Hayes, Kent. Both Husseys had a family history of involvement in the sciences. Mrs. Hussey’s sister, Fanny Reed, was also an illustrator and Reverend Hussey’s relative, James Hussey, was a member of the Botanical Society. Rev. Hussey was a regular contributor to the Transactions of the Royal Astronomical Society and other publications and was the first to propose the existance of an 8th planet based on his observations of the motions of Uranus. After 1837, his contributions ceased and in 1839 he offered his Observatory for sale to Durham University. Her career as a mycological illustrator began in earnest in the 1840s. With three children to raise, the motive for both the sale of his instruments and her publishing activities was probably financial. 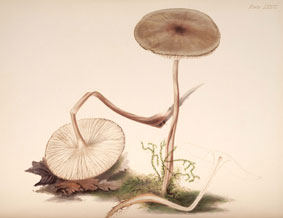