Despite her moments of rebellion, she accepted the mainstream view towards women, nature and science, seeing herself as an educator, providing information for popular reading and speaking directly to mothers teaching their children. She gives the reader a glossary of terms and offers instruction on how to select the appropriate basket and other equipment for mushroom hunting and spore collection. Hussey was a specialist in Hymenomycetes, the species that includes agarics, puffballs, and morels. As was the custom for natural historians of both sexes, she recommends food uses for her subject when appropriate.

Illustrations of British Mycology was published in two series, dating from 1849 to 1855. Series 1 consisted of 90 plates and was published by subscription. Series 2 was issued in monthly numbers of 3 plates each. The plate shown here is one of the 140 plates from the final bound edition, which includes both series. Two mushroom genera have been named in her honor. The first, was called Husseia by Berkeley in 1847, prior to the publication of her book. The second was posthumously named Husseya by J. G. Agardh in 1901. (In 1958, to avoid confusion caused by the homonym, the latter was renamed Husseyella by George F. Papenfuss.) Hussey wished she could have illustrated her book with daguerrotypes, but fortunately she was constrained by cost to publish with the lithographic process. Her illustrations continue to be recognized today for their beauty and detail. 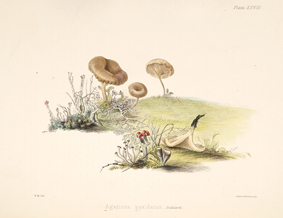 From the Missouri Botanical Garden Library.
The lithograph of Agaricus pyxidatus shows one of the illustrations by Fanny Reed, Hussey’s sister. 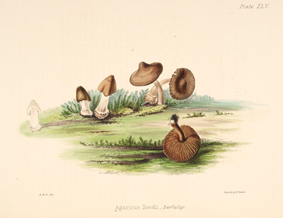