As the sisters grew, they would have had the benefit of observing the talented William Lodge engraving their father’s early publications. Some illustrations that he had completed for previous Lister publications were used again in Historiae Conchyliorum and it is likely that he engraved some of the plates from the Listers’ drawings, but after Lodge’s death in 1689, the pair replaced him as their father’s illustrators and engravers for his grand work, as well as for the articles he and others published in the Philosophical Transactions. Most of the plates were unsigned, but the illustrations in Historiae Conchyliorum are obviously the work of more than one hand. The few that are signed show variations of A, a conjoined AL or SL, and S. Sculp. Anna Lister, despite her youth, appears to be the stronger, more adept artist.

Historiae Conchyliorum was completed in parts over many years, with sections distributed to Dr. Lister’s peers long before he considered the work completed. The approved first edition was published in 1685. Anna and Susanna Lister would continue working for their father, correcting drawings and preparing more plates for subsequent printings and the eventual publication of the 2nd edition. Dr. Lister left the copperplates to Oxford University as part of a bequest. This safe-keeping allowed them to be used once again for the 1770 edition. 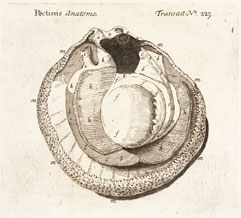 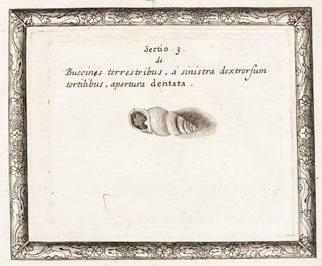 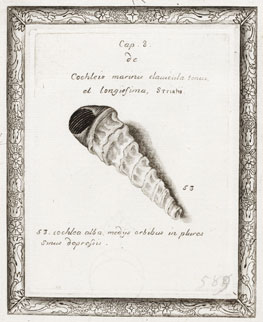 Historiae Conchyliorum was Dr. Lister’s opus, but its production was a family affair. Anna and Susanna, taught by their father, drew and engraved the illustrations. The plates were printed on a press at home, probably by a brother. The sisters designed some plates soley used as decorative borders. The same border plates were used repeatedly throughout the book, using a technique where a printed page was run through the press a second time with the decorative plate positioned arount the first impression, in order to receive its decorative border, sometimes to the detriment of the paper. Some critics complained that this distinctly feminine touch was unprofessional.