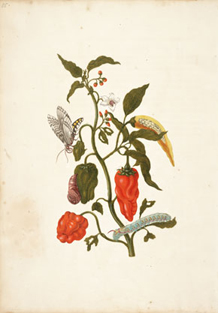 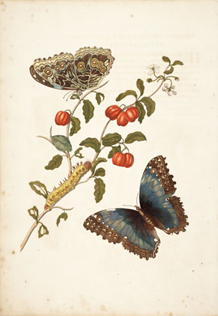 Many of the fruits and vegetables growing in Surinam were new to Merian. She was fascinated by the interaction of plants and people, taking an approach that today would be called ethnobotany. In her descriptions, she provides information on the the use of food plants such as cacao and red pepper by Surinam natives, and compares bananas to apples. She was also interested in household uses of plants, for example for creating fabric and dyes.

Visiting Surinam, Merian discovered that she did not approve of the Dutch plantation owners. She attributed their lack of systematic cultivation for crop improvement to a lazy nature. She believed that improved agricultural techniques would yield better tasting cherries. She was also critical of their treatment of the natives.

In July 1699, with the support of the Witsens and others, she drew up her will and sailed for Surinam with her youngest daughter, Dorothea. With her she brought painting materials and prepared parchment. She was astounded by the abundance of life in the jungles of Surinam. Here she continued her studies in metamorphoses, creating her most important work: the paintings that she later translated into copperplate engravings of reptiles, amphibians, insects and the tropical plants that were their hosts. She left Surinam after 21 months, complaining of the heat. She had contracted malaria which left her permanently in poor health.

Although by 1685 Merian’s career was flourishing, she left Nuremberg and moved with her daughters and her widowed mother to join a Labadist religious commune at Castle Waltha, Friesland, eventually receiving a divorce from Graff. It was at Castle Waltha where she first saw specimens of plants and insects from Surinam. Six years later, she left Castle Waltha, disagreeing with the Labadist principle of mortification of the flesh, and moved to Amsterdam, where she began supporting herself once again by her artistic skills, but was immediately recognized for her research methods. She associated with the leading natural scientists: botanist Caspar Commelin, medical professional Frederik Ruysch, city officials Nicolaas Witsen and Jonas Witsen. She was friends with artist Agnes Block and taught painting to the reknowned still-life artist Rachel Ruysch, Frederik’s daughter.