In Indiana, Price was educated at the Episcopal Church school St. Agnes Hall.  After the war, the Price family returned to Bowling Green, but the period proved to be difficult one for the family. Her parents and brother died suddenly between 1873 and 1875, leaving Price and her sister Mary to manage for themselves. Price became bedridden with a mysterious back ailment and would remain invalid for the next decade. The sisters did what they could to supplement their dwindling inheritance. Despite her ill health, Price began teaching watercolor painting, using birds and plants that her students would collect and bring them to her bedside as subjects. In the early 1880s she travelled to Philadelphia for six months of treatment from Dr. Weir Mitchell.  Afterwards, her health, though far from perfect, was much improved, and she declared herself  “all patched up.”

Sarah “Sadie” Francis Price was born in Evansville, Indiana in 1849, the third child of Alexander and Maria Price. The family soon moved, settling in Bowling Green, where she spent her first twelve years living the normal life of a small town girl. By 1861, the harsh realities of the Civil War changed the family circumstances. The Prices were sympathetic to the Union cause. Her brother Frederick joined the Union army, and Price, her sister and mother returned north to Indiana. Her father liquidated his hardware business and all family assets before joining them. 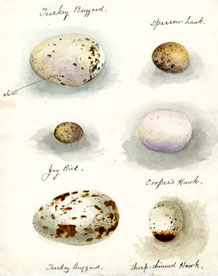 Bird Eggs: Turkey Buzzard (top and bottom), Sparrow Hawk, Jay Bird, Cooper’s Hawk, and Sharp-shinned Hawk. Although she specialized in botany, Price was fascinated with natural history in general. She left a collection of scientific artwork which included birds and their eggs from her native Kentucky.