Price was an inveterate collector of plant specimens.  She carried them back from the field in her steel, watertight collecting container called a vasculum, then pressed, dried, mounted, named and organized them, forming a personal herbarium.  Price’s herbarium was frequently used as a subject for her paintings. She prepared a number of watercolors and pencil drawings representing the entire flora of Warren County Kentucky. She assembled these into an exhibit displayed at Chicago Columbian “World’s Fair” Exposition of 1893, where they were awarded a first place diploma as the finest herbarium exhibit.

Price now began her studies and publication in natural history in earnest. She wrote papers and gave lectures on plants, birds, insects, fishes, shells, clouds and astronomy. Between 1893 and 1907, she penned over forty scientific papers which were published in a variety of popular and scientific journals. She organized and taught classes out of her home. Her nature studies classes were so popular that that they persisted for nearly thirty years after her death. On field trips into the Kentucky woods, accompanied by either a group of students or by one or two companions, she employed the transportation of the day; foot, horse, buggy and boats. Though the journeys were rigorous, she prided herself in always being respectfully attired in full-length skirts which made moving through the fields and forest all the more challenging.

Philampelini, Eumorpha pandorus. Price also illustrated butterflies and moths in various stages of their metamorphoses. Her images were often presented in the style of a specimen, as in this illustration of Pandorus Sphinx, showing both wings positioned next to the body, with one wing reversed in order to reveal both front and back details. 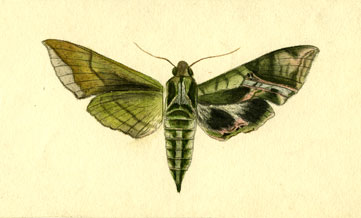