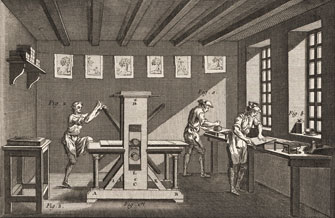 In Europe engraving on metal was used as a decorative art form by armourers and goldsmiths but the first engraved prints on paper were produced in the 15th century. By the 17th century, when the Listers and the Merian family flourished, intaglio was the standard for producing mass quantities of finely detailed illustrations. When the plates were made of copper, a common practice, the technique was known by the eponymous name copperplate engraving.

Copperplate engraving can involve one or more artists and/or artisans. Often the first step in the printing process is for the engraver to draw a very light line over the surface of a smooth metal sheet or plate, in order to replicate a sketch from the artist’s original illustration. Then he or she engraves or incises deeper lines lines into the plate with a tool called a graver or burin. The thickness of the burin determines the weight of the line. After the engraver has completed the detailed drawing on the plate, the printing process begins. The printer rubs ink onto the plate, and wipes the surface clean, leaving ink in the engraved recesses. A dampened sheet of paper is placed on the plate and run through a press. The result is a fine line printing, producing a reversed image to the artist’s original illustration on the plate. The lighter sketch-like lines that were made during the preliminary preparation do not hold much ink and are only visible on the print by the closest examination. Engraved prints are often easily recognizable by the tell-tale beveled mark left behind from the plate. A metal plate can be re-used by grinding and polishing, although this laborious process results in the loss of a quantity of the metal. 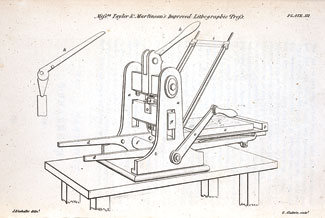 An "improved" lithographic press from the 1825 publication Engravers' Complete Guide, part of Mechanics' Library, or, Book of Trades / by C.F. Partington.

Invented by Alois Senefelder in the late 18th century as an inexpensive alternative to copperplate engraving, lithography quickly became the first choice for illustrators and their publishers. In this environment, John and Elizabeth Gould, John Lindley and his artist Sarah Drake, John James Audubon, and others were able to feed the growing popular appetite for natural history information with sumptuous reproductions.

To create a lithographic reproduction, the artist or delineator draws upon a flat slab of finely grained limestone with a grease pencil. Like drawing with a pencil on paper, this method of putting the image on stone is much faster and allows for greater variety of visual textures than copperplate engraving. The limestone is then treated with a gum arabic/nitric acid solution, changing the composition of the surface except where it was protected by the grease. The grease is removed, and working quickly, a brayer full of ink is rolled across the surface of the damp stone, with the ink adhering to the untreated, formerly grease-covered, portion of the stone and repelling from the wet, treated portions. A piece of paper is placed on top of the stone, and the slab is run through a printing press, producing a highly detailed image and leaving no marks like the beveled edges on copperplates. The lithographic process today generally uses aluminum or zinc plates and a photosensitive emulsion.

Some color printing techniques were in use early, but the scientists producing or commissioning illustrations had exacting standards that these crude techniques could not fill. Although the prints were mechanically reproduced, the color was added by the hand of the original artist or by teams of professional colorists. Maria Merian worked with her daughters on her books, while John Gould hired Gabriel Bayfield who managed the work of his two daughters, Mary and Elizabeth. In the case of coloring for hire, the scientist would sometimes provide a guide print with precise instructions for color, shade, blending, etc. or an original watercolor. Working from the guide, the head of the team of colorists would present a sample to be reviewed and corrected. Because each image is individually hand colored, some variation can be observed from one edition of a book to the next, while some copies will remain uncolored.

Counterproof is a technique that produces the finest quality copperplate printing. Historically, this technique was reserved for an artist’s wealtiest or most influential patrons. After the fresh print is pulled, another piece of paper is immediately placed across its surface. This results in a print with delicate lines, oriented to the same direction as the original drawing or watercolor and with the final image lacking the beveled impression left by a plate edge.