[an error occurred while processing this directive]

Between 1973 and 1979, Wilson-Ramsey worked on illustrations for the Flora of Panama project based at the Missouri Botanical Garden. In 1985 she began a four-year project, her favorite to date, at the Bishop Musuem in Honolulu, Hawai’i. Here she worked as the sole illustrator for the Manual of the Flowering Plants of Hawai'i. Twelve years ago Wilson-Ramsey returned to the Missouri Botanical Garden to work on the Flora of North America. Her illustrations can now be found in nine volumes of the anticipated thirty volume project. Beginning in 2001, she was promoted to Art Director and Illustrator for the project, which allows her to contribute her own illustrations as well as coordinate the efforts of several other contributing artists.

Wilson-Ramsey’s work has been featured in national and international exhibitions. She has been commissioned to create artwork for celebrities such as television and film star James Gandolfini (Tony Soprano in The Sopranos) and Prince Andrew of the English Royal Family. In 1987 at a World Wildlife Fund symposium, Prince Phillip of England requested a private viewing of original artwork created by Wilson-Ramsey for the Manual of the Flowering Plants of Hawai'i.

In addition to Wilson-Ramsey’s work on the Flora of North America, she receives regular commissions from the Missouri Botanical Garden staff to illustrate scientific papers, often portraying species new to science.  In the near future she hopes to return to one of her early artistic loves; oil and watercolor painting of plants and flowers. 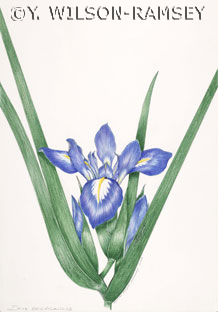 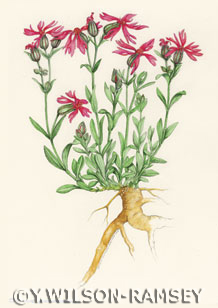 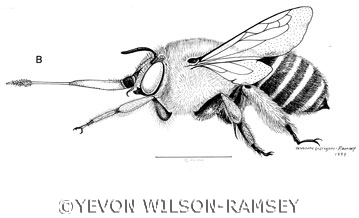 Anegilla cupersis, an Iris family pollinator. Drawn in 1997, this ink drawing is 11.5" x 9.75". The scale line appearing below the insect represents a length of 5 millimeters.

Iris brevicaulis. This illustration was created as the frontispiece for Volume 26 of Flora of North America.